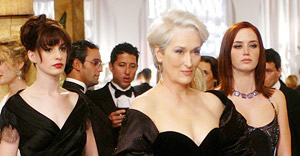 Ron and I caught Meryl Streep vamping it up in the new movie The Devil Wears Prada (based on the novel written by the former assistant to the editor of Vogue). The movie is a good laugh and both Streep (the icy editor) and Ann Hathaway (the assistant) turn in great performances (along with Stanley Tucci and Emily Blunt).

I’m no fashion maven. Ron and I clash on this. I see fashion as another system of symbols used to both include and exclude people from different groups wrapped up in abusive labor practices, crappy workmanship and planned obsolescence. Essentially, we don’t grow feathers so we have fashion.

But there’s a scene that particularly caught my eye:

The dowdy assistant is wearing an electric blue polyfiber (heavens!) cable knit sweater and scoffs at the fashionistas mulling over two belts – both electric blue – sorry cerulean. She says that the belts look exactly the same.

Streep’s character then does a fantastic monologue about how 2 years ago a designer used cerulean blue in a collection which then caused to be used by more designers and covered in magazines and then made it’s way down the fashion ecosystem into the bargain basement and down to the assistant’s electric blue/cerulean sweater – how thinking you are an exception from the fashion system is impossible when you are literally draped in it every day. Now if someone explained fashion like that to me, I’d totally dig it. it’s like I don’t like history explained only in terms of victories and wars, but sociological impact and trends I can get into.

But what it made me think of is how often trends that are bubbling among the blogs transition their way into the mainstream media and into household consciousness. When you first start reading blogs you’ll start to notice a pattern of what you see on the evening news was in the blogs 3 days ago, what is in the magazines was in the blogs 2 months ago.

Blogging is word-of-mouth you can track.

Usually with word-of-mouth, the fabled consumers talk about something and their babble disappears in the ether – or it is harnessed via private email and so you aren’t able to take a statistical sample. But with the auto-publishing of blogs (combined with their search-engine friendly page structure) you find a transcription of word-of-mouth that doesn’t just echo into nothingnesss – it echoes back and churns out (or burns out). The blogosphere is a transcript of millions of little votes for and against topics, trends, people, brands, ideas and products spread out over the globe – instantly available, indexable, searchable and capable of being monitored. So often the wealth of blogs is in their accumulation – in their collation – in the macroview.

Trends are now spotted, promoted and co-opted with greater and greater speed.