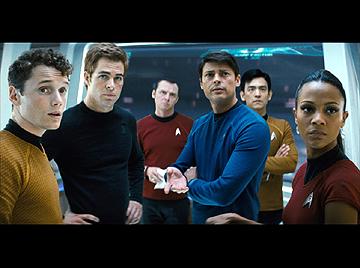 As the Star Trek juggernaut barrels through pop culture again, many of my co-workers and non-Trek friends are asking us what the hell the big deal is.

In our house, Star Trek was our post-Sunday morning mass + donuts for breakfast TV programming. And then when the Next Generation show came on it was the only TV show we were allowed to watch at dinner time on Saturday nights (mom thinks watching TV at the dinner table is gross and trashy).

I thought we could put together a primer for our less-Trek-blessed brethren:

Why was Star Trek different?

Star Trek ran for only 79 episodes and was canceled after three years and languished until re-runs helped a wider audience reconsider the vision of its creators.

At the core of the Star Trek sensibility was optimism, hope and the power of technology to help us evolve and become better people. The Original Series (the Shatner/Nimoy era) was a reflection of the anxieties and hope of the 1960s, the civil rights movement, women’s lib, the Cold War. Science fiction usually either helps us escape the present (Star Wars as an escape from post-Watergate, post-Vietnam, post-oil crisis 1970s) or delve even deeped into it (the new Battlestar Galactica’s examination of anxiety in a war-obsessed, on-the-edge, nihilist planet, war-).

The cast of Star Trek was a liberal’s wet dream of racial diversity. You had a black woman, an asian man and – in the middle of the Cold War – a Russian. Later Star Trek-based series would bring even more diversity and go beyond ‘White Guys in Leadership’ tropes. Along with this, the character of Spock is a half-breed: he has a Vulcan father and a human mother. This conflict is mined very effectively in the new movie and can expand into the motif of interracial people being caught between cultures, sometimes not feeling like belonging to either.

Star Trek featured the first interracial kiss on American network TV between a white man and a black woman. It was ‘allowed’ by the censors only because Kirk and Uhura were enchanted by forces beyond their control. Still, a white man and a black woman kissing on TV was considered taboo for a culture that was probably still up in arms about Lucy being shown pregnant on TV in the 1950s. The kiss provoked protests and other outrages. Bonus: Did you know that Psycho was the first time a toilet was shown in an American movie?

Why Sulu fences in the new movie: George Takei – the actor that played Sulu – was part of the Japanese internment camps of World War II where his family was relocated to a camp in Arkansas. He is one of the most notable early asian faces on American television that went beyond the war-soured stereotypes (or background characters on M*A*S*H). In one episode of Trek, Sulu goes a little nutters and the script said he was to fight Kirk. Takei was determined to fight in any style except kung fu and told the writers he knew fencing and then promptly worked his ass off learning how to fence. Takei would later come out as a gay man and become an advocate for gay rights as well as visibility for asian-americans. This is why the new Sulu (John Cho, first seen in the Harold/Kumar movies) fences the Romuluans in the new movie – with a pretty bad-ass sword I must say. Gay Trek fans are begging for a same-sex relationship to be portrayed in the movies or series (there actually was a gay episode written, but never filmed).

Why Uhura matters: Nichelle Nichols, the actress that played Uhura said that she once met Martin Luther King, Jr. and he told her she absolutely had to stay on with the show because she was such a positive role model for young black girls growing up in the 1960s. The new Uhura is light-years more fleshed out than the original portrayal but still needs go past the sex kitten costume and supporting role for The Important Men’s Stuff being done around her. The Uhura character would later advance to ship captain and high ranking through the Star Trek movies and novels. Nichols went on to do a ton of work as an advocate for NASA recruting minorities and women into the space program.

‘She can’t take much more captain’ – Scotty always says this when the ship’s engines are about to give out – usually this is done in the middle of a jump to warp speed.

‘Fascinating’ – a common comment by Spock. Vulcans don’t show emotion and worship logical and cool-headed-ness. Spock’s Vulcan side and human side fight this out often.

Why Kirk is making it with a Green-Skinned Woman. Kirk is a lovable rake to be sure and in the original series had his Bond girl of the week – usually an alien lovely scantily clad and covered in makeup. This is a reference to that.

Why McCoy is a bit crazy: In the original series ‘Bones’ McCoy, the ships chief medical officer is always shown diagnosing everything in sight with a device called a tricorder. In the new movie this is driven home to great effect. You’ll laugh. McCoy is played by Karl Urban who Lord of the Ring freaks will remember as Eomer, Eowyn’s brother. He was also in that godawful Doom movie.

Chekov’s accent. In the original series the Russian character Chekhov mixed up his W and V sounds. This is why everybody laughs alot in that one scene where he’s trying to give a code to the ship’s computer. 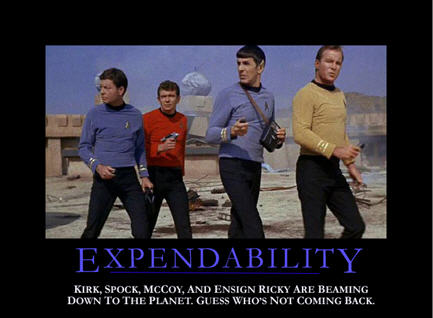 Red Shirts. In the original series, there was always an ‘away team’ that would beam down to an alien planet. Usually two of the show’s stars and then some hapless chump in a red shirt. Inevitably the red shirt gets eaten or killed or imprisoned by something someway or another and doesn’t make it back to the ship.

Why are there no Wookies? Star Trek does not contain any of the following: Vader, Wookies, Ewoks, Tan-tans, Jabba, Tie-fighters, Death Stars so just shut up about all that shit. Yes, captain Kirk is a white-blond-messiah-farmboy, no he is not blessed with The Force. Star Trek is less about absolute good and absolute evil. If you want to send a friend or spouse into a conniption, ask them when Yoda is going to show up. 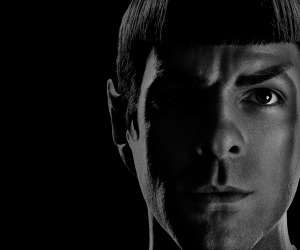 What else should our non-Trek friends and family know to fully enjoy the hell out of the new Trek movie?