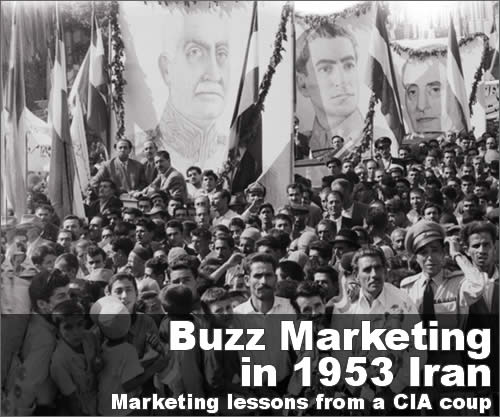 A lot has been written in the past few days about how social media and technology has been at the center of the developments in Iran. But I’d like to go a few decades back.

Something rather startling happened during Obama’s trip to the Middle East a few weeks ago.

For the first time a President acknowledge the US role in the 1953 overthrow of the Iranian government. Obama was talking about the prickly relations between the US and Iran:

In the middle of the Cold War, the United States played a role in the overthrow of a democratically-elected Iranian government.

Never before had a US President admitted what was already well known to everyone in Iran.

But how do you overthrow a government?

As you can probably guess, it was about oil.

After World War II, nationalist leaders began seeking to reduce the power of the Anglo-Indian Oil Company and nationalize the petroleum business. Initially, the British had asked President Truman for help in deposing the Iran’s Prime Minister Mosaddegh. Truman refused. Later on, the Brits would approach Eisenhower who agreed to make a joint commitment to depose the elected civil government (with five US oil companies at the ready to grab the resources once control was re-established – and doesn’t that sound familiar?).

And so the C.I.A. selected Kermit Roosevelt for the job (one of Teddy’s grandsons). Roosevelt landed in Iran and began his one-man campaign to overthrow a democratically elected government. Quotes below are from Amy Goodman’s interview with Steven Kinzer, author of All the Shah’s Men (book cover, above).

The first thing [Kermit Roosevelt] did was, he started bribing members of parliament and leaders of small political parties that were a part of [Prime Minister] Mossadegh’s political coalition. Pretty soon the public started to see the Mossadegh ‘s coalition splitting apart and people denouncing him on the floor of parliament.

As the viral campaign starts to take happen, you can use traditional media channels and placements to amplify the message. The C.I.A. put journalists on the payroll.

Within a couple of weeks, he had 80% of the newspapers in Tehran on his payroll and they were grinding out every kind of lie attacking Mossadegh .

Once you’ve started seeding things with a viral message and amplified it with traditional tactics, you need to get some paid reviews. You need experts to talk about your product or service. Or demonize the competition.

The next thing Roosevelt did was start bribing religious leaders. Soon, at Friday prayers, the Mullahs were denouncing Mossadegh as an atheist enemy of Islam.

Also be sure that your staff is at the ready to provide support for any customer questions or complaints with your product delivery.

Roosevelt also bribed members of police units and low-ranking military officers to be ready with their units on the crucial day.

Use Social Media to Spread the Word

As things roll on, you can use social media to bring your ideas and messages to a larger crowd.

Ask for the Sale

And once everybody is beating down your door (or beating down each other), you have to go for the brass ring and ask for the sale:

The first coup that Roosevelt organized was scheduled to take place on August 15th of 1953. … The C.I.A. had a general already designated to take over the next day as prime minister of Iran. But what happened? Mossadegh got wind of this plan. So now, the coup had failed and the Shah, who had been waiting out the results at his resort near the Caspian, immediately fled the country.

Go Back and Ask Again

Sometimes you don’t get the sale on the first try. What’s that old adage that you have ask multiple times from multiple channels?

On his own, [Roosevelt] activated his mobs on the 19th of August, just four days later, in a second coup attempt. They rampaged through the streets by the tens of thousands. Many of them, I think, never even really understood they were being paid by the C.I.A. By midnight, on August the 19th of 1953, his house was in flames, and he had fled over the back guard wall to surrender himself a couple of days later. And the general, who was a C.I.A.–who the C.I.A. had selected as the designated savior of Iran was installed as prime minister.

And the shah who was cooling his heels in Rome also returned to the country. He’d later toast Roosevelt and say, “I owe my throne to God, my people, my army, and you.”

Find a New Niche and Repeat

Once you’ve conquered one niche (or country), time for a new target market.

Roosevelt came back home to raucous reception. And of course they wanted an encore.

Roosevelt was called into his boss’s office, and told, you know, you did such a great job overthrowing that government in Iran, we have decided we don’t like the government down in Guatemala. Kermit Roosevelt demurred but someone else was found, and in less than a year after the democratic government of Iran was overthrown by the C.I.A., the C.I.A. did the same thing in Guatemala.

I’m always entranced by the ideas of marketing and ‘management perception’ in the world around us whether they are exercised by entrepreneurs, bloggers, corporations or countries.