Now why didn’t I think of that.

Yahoo continues to open up their expertise for others to use and leverage:

You build great web applications. We have millions of users who store their data on Yahoo!. Browser-Based Authentication (BBAuth) makes it possible for your applications to use that data (with their permission). BBAuth also offers a Single Sign-On (SSO) facility so that existing Yahoo! users can use your services without having to complete yet another registration process.

Markus Frind: PlentyOfFish.com – $300,000 per month Markus Frind is a local Vancouverite who is turning the online dating world upside down. His site, Plentyoffish.com is the biggest free dating site on the Internet. Plentyoffish.com receives up to 500 million page views per month and make over $10,000 per day for Markus, who runs the site from home.

From Mark Forster author of Get Everything Done and Still Have Time to Play:

We put up resistance to things that challenge us. Feeling resistance is usually a sign that we should be doing something. The secret to good life management is to do what we are resisting the most at any given time.

George Lakoff (author of the stupendous Don’t Think of an Elephant’) if back with 12 reasons why progressives keep screwing up their campaigns. Regardless of your party affiliation, this is valuable stuff to know because it applies so much to business marketing.

Progressives often argue that “truth doesn’t need to be framed” and that the “facts speak for themselves.” People use frames — deep-seated mental structures about how the world works — to understand facts. Frames are in our brains and define our common sense. It is impossible to think or communicate without activating frames, and so which frame is activated is of crucial importance. Truths need to be framed appropriately to be seen as truths. Facts need a context.

After allowing the amateur community to create the podcasting phenomenon, then leveraging the support and technology created by other people, Apple is now going after companies that try to put the word ‘pod’ or ‘podcast’ in their names. Somebody’s lawyers aren’t busy enough. Other suggest we move to terms like mediacast, audiocast, videocast. Ugh.
Update: After more reading – Apple is going after the terms ‘podcast ready’ and ‘mypodder.’ Still pretty dumb, I think.

That article from StartupNation.com made its way into the Wall Street Journal print edition! Booyah!

Now in our 2nd printing! 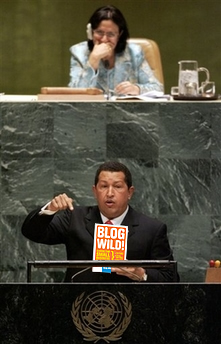 President of Venezuela Hugo Chavez at the UN ranting about Bush ‘the devil’ and recommending all Americans read Blogwild! A Guide for Small Business Blogging.

Huge thanks to Jim Hopkins and the folks at USA Today for featuring me and the book in today’s article: ‘Blogs put businesses on Web search map’

Your pal and mine, Alberto Gonzalez is hungry for more data. He wants to demand ISPs retain 2 years worth of internet logs on every customer.

Gonzales and FBI Director Robert Mueller have met with several Internet providers, including Time Warner Inc.’s AOL, Comcast Corp., Google Inc., Microsoft Corp. and Verizon Communications Inc. During those meetings, which took place earlier this summer, Justice Department officials asserted that customer records would help them investigate child pornography cases. But the FBI also said during the meetings that such records would help their terrorism investigations, said one person who attended the meetings but spoke on condition of anonymity because the meetings were intended to be private.

It is a two-fer! We have What about the children!? moral panic with a nice gooey nougat The terrorists will win! filling.
Discussion on Metafilter led to this ditty – from 1995.

How to get what you want in 4 easy stages:
1. Have a target “thing” you wish to stop, yet lack any moral, or practical reasons for doing so?
2. Pick a fear common to lots of people, something that will evoke a gut reaction: terrorists, pedophiles, serial killers.
3. Scream loudly to the media that “thing” is being used by perpetrators. (Don’t worry if this is true, or common to all other things, or less common with “thing” than with other long established systems – payphones, paper mail, private hotel rooms, lack of bugs in
all houses etc)
4. Say that the only way to stop perpetrators is to close down “thing”, or to regulate it to death, or to have laws forcing en-mass tapability of all private communications on “thing”. Don’t worry if communicating on “thing” is a constitutionally protected right, if you
have done a good job in choosing and publicising the horsemen in 2, no one will notice, they will be too busy clamouring for you to save them from the supposed evils.

More things change…
Andy’s prediction: After scaring the hell out of parents everywhere and fearmongering in the media, this passes to give all the legislators a constituent boost. Then later on, this is extended to 4 years, then 8, then 10. And once they can troll your search logs you can be anybody they want you to be.