A social-network presence, she found, was less effective at customer acquisition and retention than e-mail and paid search. The study found that the average Facebook metrics are a 1% click-through rate and a 2% conversion rate. E-mail marketing, by comparison, has an 11% click-through rate and a 4% average conversion rate. … Though companies theoretically show up on the news feed of their Facebook fans, the analyst said companies are unsure how frequently or prominently their posts do show up on the feeds. When retailers put like buttons on their product-detail pages, are they really thinking?” she said. “Your competitors can see what products are more liked than others. Are you exposing your sales information? So why would expose this information?”

Lots of hype about Quora but the site excels when you get answers straight from the horse’s mouth: 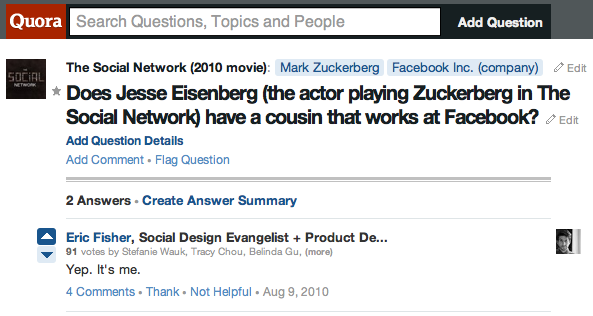 Great excerpt from his blog post about small business and social media:

[M]y father, a long-time restaurateur in San Jose, California, is currently in the process of resurrecting a restaurant called Lou’s Village after several years of early retirement. When his last venue closed there was no such thing as “social media.” A few months ago, when he and my uncle were first breaking ground on the new location, they created a Facebook page for the new Lou’s. What happened next blew them away. Hundreds of people who’d loved the old Lou’s embraced this business that doesn’t exist yet (and won’t for another year). These locals cheered the brothers on, offered feedback about the proposed design of the space, consulted about which dishes to include on the menu (popcorn shrimp!, cioppino!), and reminisced about the old joint. When drama struck–the community demanded hearings about whether to allow the new restaurant a permit for late night entertainment–Lou’s had an army of devotees ready and willing to flood the hearing. The social web is powering my dad’s success before opening day.