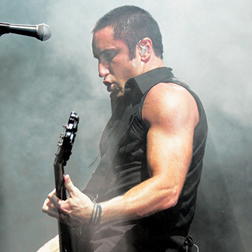 I’ve always been attracted to creative artists that have powerful singular visions, an introspective process and a commitment to technical brilliance. That’s why I like Hitchcock, Bjork, Prince, Bertolt Brecht, theatre director Peter Brook and Trent Reznor, the mind behind the industrial music of Nine Inch Nails. If you’ve ever enjoyed the lacivious lyrics of songs like ‘Closer‘, ‘Head Like a Hole’ or ‘The Perfect Drug’ you know what I’m talking about. If there was anyone that has captured the craft and Sturm und Drang of Rachmaninoff or Beethoven it would be Reznor.

If this kind of music isn’t your bag, you may have heard the stunning version Johnny Cash did of Trent’s song, ‘Hurt’ (here’s the fantastic video on YouTube) that manages to outshine the original recording capturing JohnnyCash at the end of his years.

All the artists above are prolific, always recapturing, re-doing, remixing and reconsidering their previous work: Hitchcock did two different versions of The Man Who Knew Too Much, Prince churns out dozens of songs every year, Bjork creates entire albums by herself with a laptop and Reznor continually mixes and remixes new work with old.

Reznor’s latest Nine Inch Nails release, Year Zero recently hit the recording industry with a sonic boom and is burning the charts (pretty good for such unfriendly anti-pop fare). But what really grabbed me about the whole Year Zero project is the marketing of it.

Let Your Fans Remix Your Work

Reznor was one of the first major musicians to not just encourage fans and DJs to remix his albums and music into new works but to also include the various bits and pieces of the songs, free for the taking, for others to build upon. This is like providing the ingredients to your prized pie and then encouraging people to alter, experiment and improve upon your work. Repurposing and making the music fit different styles, motifs and languages.

Remixing is often positioned as this Hot! New! Thing! when really it is just the outgrowth of existing habits – Shakespeare remixed tales from several traditions. (It is sort of like the Chicken Soup for the ____ except if Canfield had opened up permissions to include such innovation) Most businesses today consider everything a hugely guarded secret and how dare clients and customers extend a brand, product or technology (like the crazies that hack their Tivos or try and get Doom to run on their iPods).

If anybody at your house is a gaming freak you may know about mod culture where fans modify shoot ’em up games and swap in new settings, music, sound, monsters and create a whole new game that sits on top of the original game’s ‘engine’ – Natural Selection is a great example of this (in some cases, these mods get distribution by the original game’s publishers).

(Sidebar: one of my theatre profs always noted that the creative arts is the only field where you are expected to throw away everything that has come before and try to be ‘original’ instead of building on an existing body of knowledge like science or research)

This theme of extending and encouraging also applies with the Creative Commons licenses that offer a looser version of copyright that encourages others to extend, alter or redefine media. The entire open source media movement is built on this idea of don’t like it? change it! now tell me how…

I’ve got a second part to examining NIN’s marketing of Year Zero for next week… stay tuned.