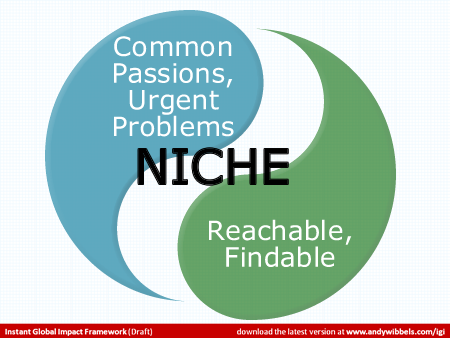 A niche is made of two parts:

Part 1: A group of people with a set of urgent problems or common passions. Not just everyday run-of-the-mill problems because people are more likely to click the Buy button when they know you are going to help them ease urgent discomfort.

I keep ‘common passions’ in there because people who aren’t desperate for solutions might buy things that fit their super-active lifestyle revolving around Jeeps or home-schooling or body modification. Common passions are tied to possibility while urgent problems are tied to fear of a tragic future.

Part 2 : A niche is a group of people that is actually a group – a findable, reachable, ‘talk-to’-able group. They must be reachable either online or offline, through conferences or newsletters or magazines. If they don’t ‘hang out’ somewhere at sometime you don’t have a niche. You have a whole bunch of people that have a common problem but don’t identify or communicate together.

Why to Direct Your Efforts to a Niche

If we take our Time-Money-Sex Venn from last week and apply it to why you might use a niche in your marketing efforts we get:

Time: Focusing on a niche saves times because you are only talking to a small set of people. You have simplified your message and efforts and products to a specific group that will be more likely to vibrate with what you are saying. You don’t aim for speaking engagements at conferences everywhere – just the right places where these people hang out. You don’t read every online forum you can find, but the specific ones where your folks are likely to be commiserating and celebrating.

Money: Your marketing efforts are more affordable because you are constraining who you are are reaching. You are laser-focused instead of a shotgun splat. Because you make products and services for a specific group of people they are willing to pay more for information tailored especially for them.

Visibility: It is easier to build credibility with a smaller group of people than trying to break out into the mainstream too quickly. Small fish, big pond. This is how I built my profile as a blogging expert. I started off working with business and life coaches, helping them understand blogs and their impact to business. Since this community is relatively small and also connected by discussion forums and lists it was easier to build a brand as ‘the blog guy’ than trying to attack the greater market at large.

How to Send Andy into a Blind Rage

Few things drive me quicker to a Wibbels fit (video) than when I ask someone their niche and they give an answer that isn’t a niche but an entire demographic.

Here is a little scene using my favorite example. I’m talking to an entrepreneur who we’ll call Wit:

Andy: What kind of customers do you work with?

Andy: So what kind of women?

Wit: No, everybody. Oh and moms.

Andy: What kind of transition?

Wit: A new job, a new child, kids going off to school, death of a parent, newly divorced.

Andy: Any specific one?

Wit:
Not really. Whatever challenges women face so they can step more fully
into their [insert post-pagan Gaia-esque women who run with wolves from
Venus who are just not that in to you metaphor here].

Usually by this time my heart rate has quickened and I’m trying to do Dr. Glassman’s trigger exercise to keep from getting a little irrational.

Women in transition is half the planet.

So
basically when you say you create products and services for ‘women in
transition’ (or as I like to call them, WITs) you are really just
indecisive and haven’t done your homework and are probably pretty
surprised you haven’t had Oprah-magnitude success. You’re just an emotional cripple with PDFs.

Yes,
if you are running a business local to a city or county you have
constrained your pool of prospects considerably, but I’m talking more
in the realm of the internet where just because you can market to
everybody doesn’t mean you should. Let’s look at some real niches:

Each morning on my walk to Six Apart down Folsom to 4th, I pass the Mexican consulate
and there are usually about 3 dozen men, women and children waiting in
line for the offices to open at 9. Just as you pass the building you
see a sign on the sidewalk that says ‘Pasaportes Fotografias’ (might be
vice versa).

There, a young guy has a white background
anchored to the outside wall of the building, a camera and tripod, a
small table with a clipboard and a little fence for crowd control.
Genius.

A defined audience and he is right there where they are to help them solve one very specific urgent problem.

I was going to take a picture but didn’t want him to think I was some kind of Minuteman.

Mother Jones
did a photo essay on a woman who specializes in creating the uniforms
and white robes for America’s sweethearts, the Ku Klux Klan.

Coming from five generations of Ku Klux Klan members, 58-year-old “Ms. Ruth” sews hoods and robes for Klan members seven days a week, blessing each one when it’s done.
A red satin outfit for an Exalted Cyclops, the head of a local chapter,
costs about $140. She uses the earnings to help care for her
40-year-old quadriplegic daughter, “Lilbit,” who was injured in a car
accident 10 years ago.

Sure it isn’t a
particularly pleasant niche – but the practical matter is racists need
someone to make their uniforms (you don’t think a man with the rank of
Exalted Cyclops is going to reduce himself to sewing do you?). Mrs.
Ruth has found a group with a common problem: they need uniforms for
their racist country club – a community unto itself. Even racists need a durable hem.

Common (though misplaced) passions, urgent problems (Oh dear what ever shall I wear to the cross-burning potluck?), reachable and findable.

And
if for some reason the Obama presidency suddenly makes trips to the KKK
Mart obsolete, Mrs. Ruth could flip to another niche that needs
constant uniform creation and maintenance and upgades: Girl Scouts.

This is my favorite example of niche.

Hijab
is the Muslim code of dress recommended by the Qur’an. Depending on
your heritage, sect or family tradition, women (and men) adhere to
various levels of modesty. Many Muslim women see their choice to wear a
head-covering or other combinations of required garments as a
connection to their past, their God, their family and as a way of
re-claiming the burqa or hijab head-scarf for themselves. 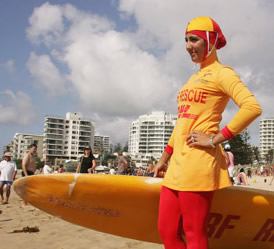 But
what if you want to go swimming? Previously, the traditional clothing
sidelined many moms on the beach, unable to play in the water with
their kids. Even more far-fetched: what if you wanted to be a
lifeguard? On Cronulla Beach in Sydney, the first class of Muslim
lifeguards joined the rest of the team sporting a new swimsuit:

Among
them were a number of women wearing a newly designed head-to-toe
swimsuit, dubbed the burqini. The two-piece outfit – featuring
leggings, a loose top and a head covering – enables them to carry out their tasks while conforming to the Islamic dress code. Mecca Laa Laa, 20, one of the newly graduated lifeguards, said it would give Australian Muslim women the freedom to enjoy the beach while fulfilling their religious obligations.
“The point is to get women active in the water, to encourage them to
participate in sporting activities … and wearing the burqini allows
them to do that,” she said.

And the
Burqini has taken the world by storm as Muslim moms and girls reclaim
the ocean and the swimming pool as a place for them as well.

See
the niche? A findable, reachable group of people with a common passion
and an urgent problem! How much is marketing about finding the how we can have it both ways?

Going
to the site for the burqini there is a whole page of testimonials that
illustrate how the business owners are completely tapped into what
their customers want:

I went inside
the pool with two of my kids! It was such a nice feeling to be able to
actually be inside the water FULLY – not half of the body, or the feet,
only. Alhamdulillah! Didn’t have that chance for a long long long time.
The last time I had a full dip inside the water was during my primary
school years I think. I have nearly forgotten how it feels. And you know how I felt on that day, wearing aheda’s swimsuit? I felt FREEDOM! I can be in the water without any feeling of self-conscious[ness]. A real freedom for me. [emphasis mine]

Yes,
from my Roman Catholic upbringing in the United States this seems a bit
silly: playing games with scripture so you can do what you want but
still adhere to the rules (but we cherry-pick Leviticus to our own
ends, don’t we?). I get the same giggles watching an Orthodox Jewish
friend navigate Shabbat without touching electronic devices and
wondering why would God want to deny you the convenience of technology
(flipside: the focused meditation brings closer awareness to divinity,
etc). Inconvenience as meditation is present in so many of the world’s religions (and fish on Fridays is still no analog to hanging on a cross).

What are three urgent problems your niche is facing?
Be specific! Not just ‘they are sad’ but what specifically they might
want to do to change their lives (freedom, control, power, etc)?

What are three common passions that bring your niche together? Be specific! Not just ‘food folks and fun’ but gunning their Harleys and peeling off into the night.

What makes sense in this essay? What doesn’t? What am I missing? What typo is driving you batty? Tell me right now: