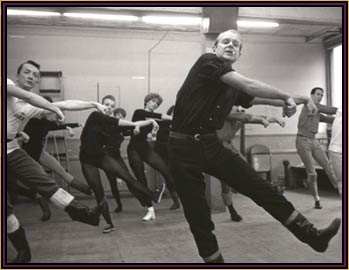 In school we were told to improve on our weaknesses. Or to ignore them. Or to hide them. American choreographer Bob Fosse did the exact opposite. He built his unmistakable style on his weaknesses.

If you mention Bob Fosse to most people they reference The Birdcage and Robin Williams thirteen-second dance style pastiche including ‘Fosse-Fosse-Fosse! Martha Graham! Martha Graham!’ (here’s the full three-and-a-half minutes ‘Try More Gum’ scene). Or they remember when the movie Cabaret first hit movie theatres (after hitting Broadway, of course). But there’s a lot more than meets the eye when you examine this American master.

Let’s a look at the opening number from the Broadway revival of Chicago starring Bebe Neuwirth (Cheers/Frasier‘s Lilith) and Anne Reinking (former companion of Fosse and choreographer of this revival). Chicago was originally a 1975 vehicle for Chita Rivera and Gwen Verdon but the message about media, murder and mayhem was way ahead of its time. The show didn’t hit its stride until the revival hit a nerve with a public already cynical from the OJ Simpson trial … gallows humor, ‘liquor & jazz’ and a sexual verve – all informed by Fosse’s (and composer/lyricists Kander & Ebb’s) vision.
This clip includes the opening number, ‘All That Jazz’, and the ‘Hot Honey Rag’ finale that the cast presented at the 51st Tony Awards.

Of course, later the revival was the basis for a movie musical that swept the Oscars with its own classic version of ‘All That Jazz’.

After watching these video clips, what do you notice?

Lots of hunched over shoulders, hats, pelvic action, lots of detail – especially in the hands, minimal movement with massive dynamics as a counterpoint.

‘Big Spender’ (also from Sweet Charity) is one of those iconic sequences that is referenced in movie after movie, performance after performance. Have you ever seen the full thing? Take four-and-a-half minutes and watch the full ‘Big Spender’ sequence.

Sexy, ain’t it? Minimalist. It takes its time. A single hand can communicate aggressive, cynical sexuality that was one of the hallmarks of Fosse’s work.

After seeing these video clips, you’ll agree that his style is singular and unmistakably his. The hats, the shoulders, the hip action, the gloves and canes… but these weren’t just elements Bob Fosse liked, they were his weaknesses.

Bob Fosse was balding. That is why he used hats so often in his work.

Bob Fosse didn’t like his hands. That is why so much of his choreography includes gloves. (He called that loose hands gesture ‘soft boiled egg hands’ or ‘teacup fingers)

Bob Fosse had hunched over shoulders. You can see that hallmark throughout his dance style.

And he was also a bit cynical as well – divorced from the usual happy-face Broadway sentiments. Once he found composer and lyricist Kander and Ebb he was quite at home in this anti-Broadway point-of-view.

Bob Fosse created a style and grammar of dance that used his perceived weaknesses as a foundation that has influenced dance and entertainment from the 1960s onward.

Bonus Video #1: Dame Shirley Bassey Sings ‘Big Spender’ (with fellow Welsh, Tom Jones). She just about ba-bumps his head clean off! Bonus Video #2: Some mix-master took a Fosse piece with Gwe Verdon from the 1960s and re-wrapped it with a hip-hop sheen.

How can you take your weaknesses and not ignore them or deny them or hide them but integrate them as essential parts of you brand, your blog, your profile?