Way back when I announced the Blogwild book deal, I’d written an ezine called ‘How Blogging Changed My Life’ where I detailed the myriad ways this simple online format had shaped my life and business and allowed me to reach out to people all over the world to share what I know in a voice that was immediate, intimate and distinctly mine even if sometimes it ended up in a run-on sentence. Since then I’ve been featured in USA Today, The Wall Street Journal, Fortune Small Business, The Chicago Tribune, Inc. many other national and global media publications. I’ve received email from Blogwild readers all over the world ecstatic to find a book that breaks down blogging in language everyone can understand and access.
Well, my friends, blogging has changed my life. Again.
Back at the BlogWorld conference in Vegas, Anil Dash, the VP of Six Apart (makers of TypePad, Vox and Movable Type) introduced himself before my presentation. Anil is one of the Old Guard of the blogosphere – a bad-ass blogger with a penchant for understated wit trimmed with purple accents (and involved in the recent 6A vs WP dust-up that ricocheted through the blogosphere a few days ago). I remember reading his posts on the Movable Type support forums as I tried to figure out what the heck chmod 777 meant and why a database abstraction layer had anything to do with anything. He is somebody I respect hugely (big-ly?) = a lot. We’ve kept in touch since then and I finally got a chance to go onsite and do some interviewing a while ago. 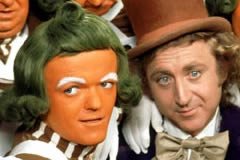 Remember that scene in the Willy Wonka movie where the kids and parents first enter the room landscaped with candy – a land of pure imagination? (I’m referring to the Gene Wilder movie, not the Depp/Burton second-rate) That sense of wonder at seeing the guts of something you’ve enjoyed and admired for a long time? That’s kinda how I felt. High ceilings, open air cubicles, even a few workers brought their dogs to work. Got to meet a ton of Six Apart-ers and lots of folks on the TypePad team. A day-long blitz and I got to learn of the REALLY cool stuff Six Apart is working on.
Last week the planets finally aligned and I am pleased as punch to announce that I’ve joined Six Apart. What will I be working on? I can’t really disclose yet but it’s gonna great fun and built around giving the best possible services and attention to bloggers – the customers that form the core of the Six Apart fanbase. It is all part of the maturing and shift of Six Apart from a software company to a services company to something even greater. I’m totally excited about it.
Yes, Ron is coming with me.

Usually the second thing people always ask is: ‘So what about… (uncomfortable pause) I mean are you both…?” Yes. Ron is coming. Actually he was already kinda there – he got impatient with me and had already transferred. When the interview process started it took him just a few hours to scope out out living spaces near 6A – carefully triangulating between train stops, groceries and the gym. We hope to be completely moved in by the first of April. Basically we’re donating and giving away everything except the essentials: cats and hard drives.
What about Blogwild?

I remain devoted to my Blogwild readers and am prepping an enhanced online resource to continue to assist and update as blogging evolves.
I the meantime we’re flying back to San Francisco early tomorrow morning to get the move-in process underway. People keep asking me if I’m overwhelmed or stressed out and I guess I’ve decided it doesn’t matter if I’m stressed out or not – the same amount of things need to get done.
Thanks everyone for your kudos and tidings so far!